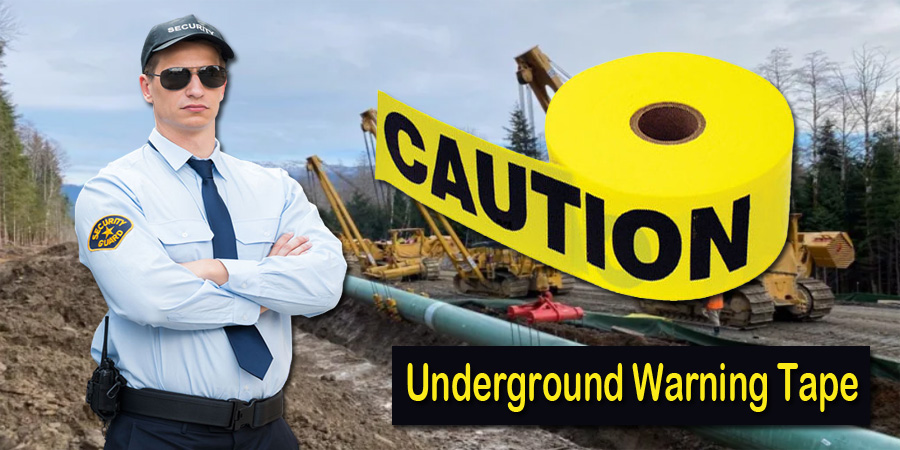 It is typically employed when health and safety problems have been recognized but are not readily evident to anyone who may approach the region. Caution tape is usually used in combination with danger signs that indicate the severity of the hazard and any protective impact that is needed.

It is typically employed when health and safety problems have been recognized but are not readily evident to anyone who may approach the region. Caution tape is usually used in combination with danger signs that indicate the severity of the hazard and any protective impact that is needed.

Underground Warning Tape is a physical and visual barrier used to alert and deny entry to a worksite. There are various sorts of tape, and you should be acquainted with them all. Yellow Caution / Warning Tape signifies minor safety and health problems in the region. These include hoses or wires on the surface, loudness, heavy equipment in operation, a crowded work location, and other factors. Except as otherwise specified, the yellow tape may signify, Welcome, but continue with caution.

There is an urgent or high-growth level of protection and health hazard in the region. There are above loads, dangling loads, work being done overhead, excessive noise transmission, open pits, necessary fall protection, restricted space entrance, and other hazards. Must not enter unless you have authorization from the appropriate commanding supervisor.

The principles and practice guidelines for utilizing any Warning Tape are as follows:

A professional or trained person should place the tape and warn personnel not to go up or down the tape, although it blocks a region unless a crisis or job order needs them.

All Warning tape with at least one of the following info must be put (within or on the tape):

Don’t ever remove barricade tape until permitted to do so.

When the hazard/task has been removed, simply eliminate and remove the tape from the place to avoid any mistake.

When Should You Employ Warning Tape?

The broader the tape, the better the recognition and awareness. Non-Detectable warning tape is used to safeguard, locate, and identify Underground Warning Tape utility installations.

Construction equipment, such as Lorries, aerial workstations, or cranes, is implicated in 75 percent of casualties caused by collisions. Warning Tape Manufacturer trades employees are most vulnerable, but interaction with items is one of the principal three top causes of death and disability for all workers (Falls, Struck-By, and Caught-Between). In 2016, there were 721 occupational deaths due to these kinds of occurrences, or an equivalent of two deaths per day, and over 232,500 injuries resulting in days absent from work. Barricades can help in avoiding the number of injuries and fatalities.

Different types of barricades are used on building sites. Tape, signs, machine barriers, and barricades are utilized to warn personnel, other subcontractors, and the public about potential hazards on the project site. There are various barriers and warning systems within each objective and degree of security. On building sites, red and yellow tape barriers alert people to stay away from potentially dangerous regions, such as the swinging area of an aerial lift or cranes. Barricades are not merely ideas in the construction sector; they are there to safeguard all workers and the public from harm or save a person.

Underground Warning Tape red indicates an impending safety and health concern in the area. If a red tape/barricade is built, no one should ever reach the area if they have worked there and a person within the barred area signs that it is okay to approach. Yellow warning tape, the most frequent, indicates that the area has minor safety and health threats. This could include any from techniques and equipment on the floor to noise levels above 85 decibels, many items of heavy equipment being used, or a crowded workspace, among other things.

The red and yellow tape must include information describing the dangers in the area at every point of probable entry. Similarly, signs should disclose who erected the roadblock and their on-site contact details, such as Singhal Industries.